A day after the whizzy and fizzy Aylesbury Festival (read about it here!), we took a stroll down the colourful Cowley Road on a beatifully sunny (and very hot!) Sunday. The traditional carnival is the biggest yearly event in Oxford, bringing together the lives and cultures of East Oxford. A parade, led by the awesome purple robot Colossus, several music and dance stages, stands and ferris wheels were just some of plenty of fun things happening that day in Cowley.

We were very happy that some of our friends from a fellow group Maracatu Estrela do Norte from London joined us and bump up our numbers! After the parade and and duet with Oxford’s own Horns of Plenty, we had a short set at a music stage and concluded the day at the Global Dance Stage – which wasn’t just the stage after the audience bravely joined our large ciranda for a wonderful final dance of the day. 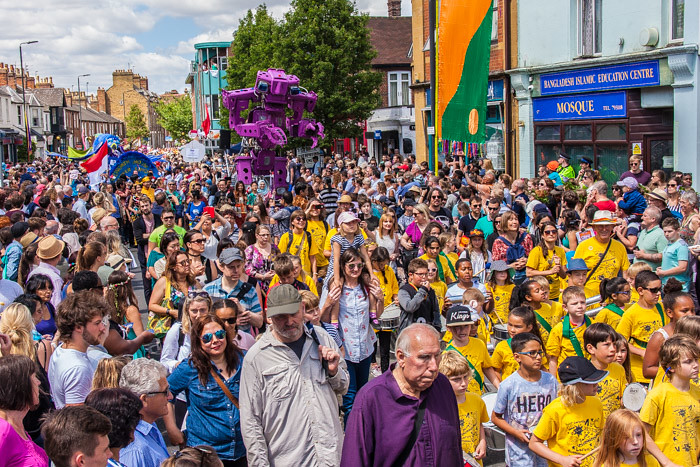 Our youngest fan and future member of our band– whoever you are, little girl, Sol Samba awaits you! After this weekend, Sol Samba is taking a well deserved summer break. We will be back at the end of the summer and will start a new season of rehearsals in September. Follow our Upcoming gigs page to see when we perform next. Or – why wouldn’t you join the band? Contact us to find out information on when we start again. You could be parading down Cowley Road alongside us next year!

Like every year in the beginning of July, this Saturday morning Aylesbury was again flourishing in colours, music and energy. Traditionally a Roald Dahl festival renamed itself into the Whizzfizzing festival this year, and the whizz and the fizz were bursting out of every pore of this lovely town. The theme was »Fantastical creatures«, so Sol Samba put on our best horns and our dragonly dancers led the 30+ groups parade through the town centre. In the main square, we later danced to the rhythms of the always fantastic Toque Tambor, as well as to the catchy sounds of the Rajasthan Heritage Brass Band, an amazing band that had flown in from Rajasthan specifically for this event.


The parade started at the Temple Street …


… and continued through the centre of town (you can hear us singing Princesa Dona Emilia, one of the band’s favourites):


We couldn’t resist dancing to the infectious rhythms of the Rajasthan Heritage Brass Band:


A dragon-ish ROAR to everyone who was in Aylesbury!